Blood on the EU’s hands

On the 12th March 2019 students, activists and academics have taken action against the visit of the former Italian Minister of Interior, Marco Minniti, the architect of Italy’s policy to externalisation of the EU border to Libya and the sealing of the Mediterranean route.

A scheduled talk at the London School of Economics (LSE) by Marco Minniti on “the situation of the Mediterranean Sea, migration and security” largely praised himself for his diplomatic ‘achievements’ during his mandated, without mentioning the tragic and inhuman conditions faced by migrants and refugees trapped there. Students, activists and academics eventually challenged him on this point, by asking if the human rights of migrants were ever taken into account when it came to sign the Memorandum of Understanding with Libya, in February 2017.

Despite distancing himself from what he called ‘national-populist’ movements and rejecting the link between security and migration, his speech mostly focused on the current situation in the Mediterranean framed in terms of European borders’ securitization.

Now more than ever, he argued, the challenge for Europe lies in the political and economic relationship that the EU will be able to establish with the African continent. 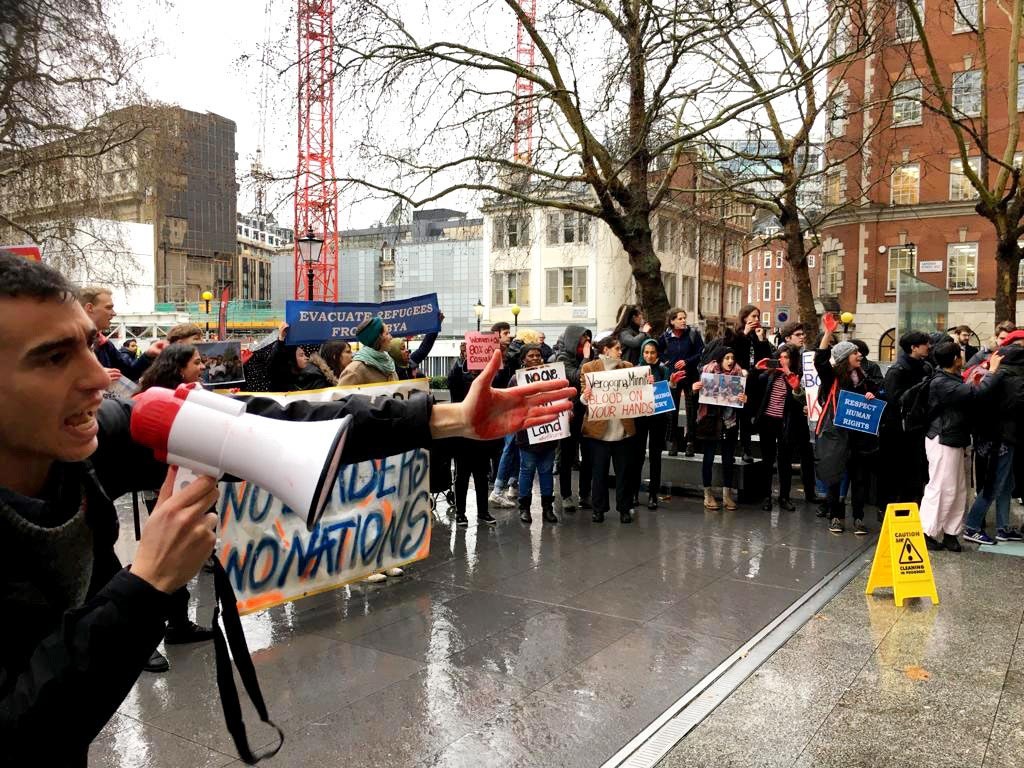 At the end of the conference, a group of activists silently raised their hands, painted in red, as a sign of protest against the deadly policies promoted in the Mediterranean during his office and supported by the EU. When the former Minister of Interior approached the exit of the building, a larger group of protesters welcomed him in red hands chanting ‘Brick by brick, wall by wall, Fortress Europe has to fall’. 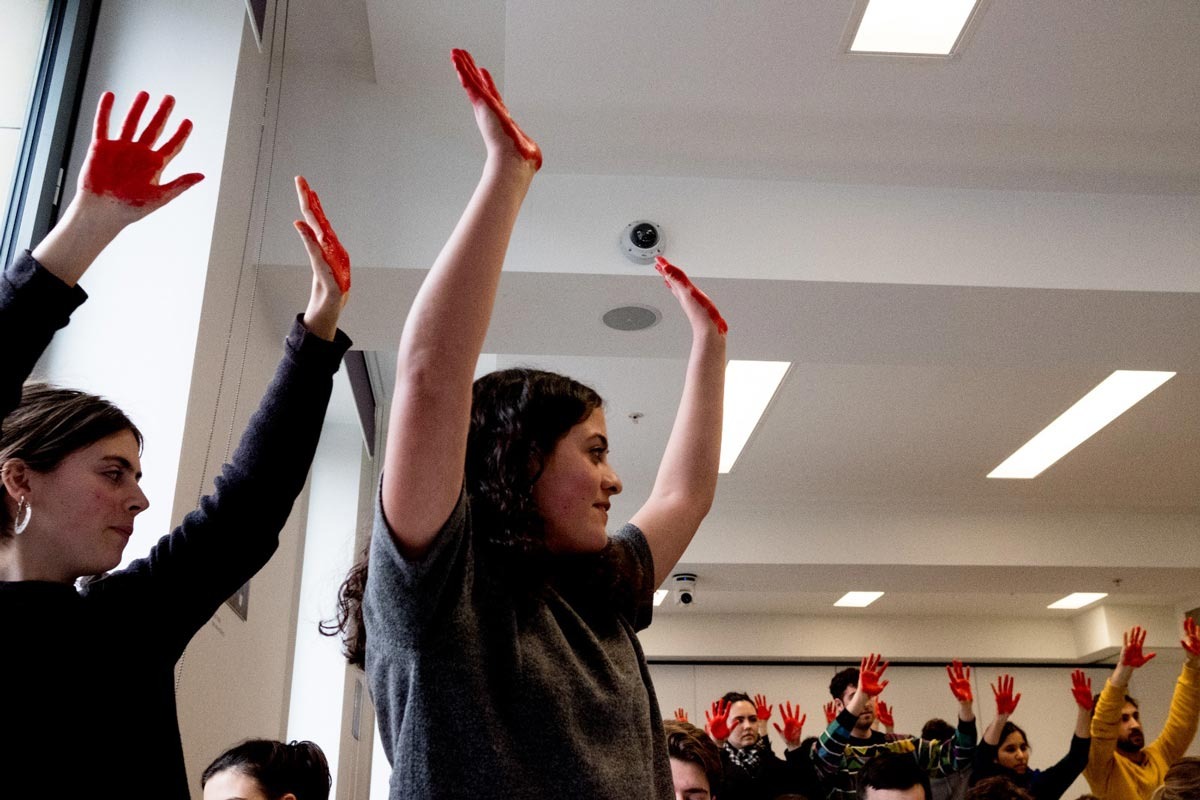 As Interior Minister under the centre-left coalition government of Gentiloni (2016-2018), Minniti initiated, pursued and enacted the following:

The externalisation of the EU border to Libya and the sealing of the Mediterranean route. In February 2017 a Memorandum of Understanding with Libya (MoU) was signed between Italy and the Serraj government, stressing the importance of state sovereignty and territorial integrity over the protection of asylum seekers, and aiming to stop migrant departures across the Mediterranean to Italy. This MoU clashes with the principle of non-refoulement inscribed in International Refugee Law that forbids states from returning asylum seekers to countries where they would be in danger of persecution. In March 2017, a group of six Libyan lawyers, jurists and politicians managed to win their appeal and get the court in Tripoli to suspend this MoU deeming it unconstitutional and illegitimate. Nevertheless, the MoU set the scene for sealing the Mediterranean for people on the move by tasking Libyan coastguards to bring them back, and sentenced them to imprisonment in detention centres in Libya. Minniti went on to strike various deals with Libyan ‘authorities’ (many of whom are armed militias and para-state groups, often involved in human smuggling). He also enabled the further externalization of European borders by supporting and funding Libya’s border patrol on the southern border and rebuilding the Libyan coastguard in the Mediterranean. This policy was endorsed by 27 EU representatives during the Foreign Affairs Council summit in July 2017.

The criminalisation of solidarity and rescue of people on the move. During the summer of 2017 Minniti was responsible for the creation of the Code of Conduct (CoC) for NGOs rescuing people in distress at sea, marking a big step towards the criminalisation of rescue and solidarity that has since been escalated by Interior Minister Matteo Salvini. The Association for Judicial Studies on Immigration has called this ‘an exercise of jurisdiction that is at odds with the basic principles of the Law of the Sea’, resulting in ‘objectively diminishing the capacity of NGOs operating at sea to save lives’, as, for one, the CoC prohibits transferring persons to other vessels even when lives are at risk. It also obliges NGOs to cooperate with the search and rescue operations of the Libyan coastguard, despite ample evidence of the dangerous actions disregarding basic norms of safety at sea undertaken by the latter both within and beyond the outer limits of Libyan territorial waters. Finally, it aimed to enforce the presence of armed police officers on NGO vessels and requested their collaboration in investigations, going against the humanitarian principle of neutrality of the NGOs.

Curtailing asylum seekers’ access to justice while increasing deportations. The main aim of the Minniti-Orlando Decree (April 2017) was ‘to curtail illegal immigration’ by expanding detention capacity so as to increase deportations. The plan was to build a detention centre hosting 1600 people in every Italian region. In addition, in order to speed up international protection procedures, the new law allows for only two jurisdictional levels instead of three for appealing against an asylum decision, thus reducing asylum seekers’ guarantees and possibilities for eligibility for asylum. Finally, asylum seekers won’t have to appear before judges anymore, allowing for judges’ decisions to be based solely on the video-recordings of the applicants’ interviews with the Territorial Commission. As a result, asylum seekers’ right to defense is substantially curtailed, thus limiting their access to justice. 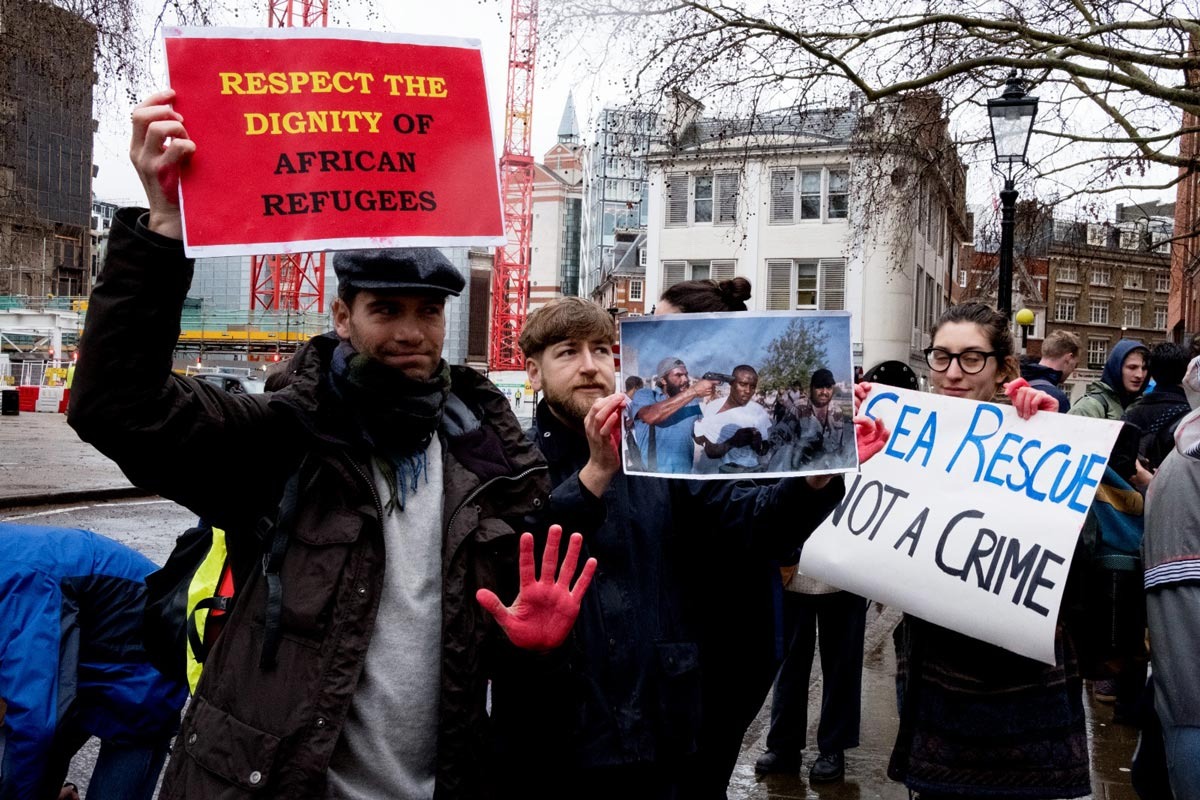 These policies have resulted in hundreds of thousands of people being trapped in Libya, arbitrarily detained, tortured, raped, enslaved and exploited. They also resulted in greatly diminishing the work of NGOs doing rescue at sea, which led to an increased death rate in the Mediterranean Sea. Current Interior Minister Matteo Salvini (leader of the far-right party Lega, currently in a coalition government with the 5 Star Movement) has been implementing ever more horrific policies with regards to migration (see for instance the ‘closed ports’ strategy and the ‘decreto sicurezza’). While wholeheartedly denouncing these policies, we would like to underline that Salvini’s actions vis-à-vis migration are in continuation with those initiated by Minniti. We therefore take this opportunity to denounce the murderous policies of both centre-left and right-wing governments in Italy – which have almost unanimously been supported and funded by the EU. In the face of these racist politics of exclusion and death among EU governments, we call for a radical rethinking of current mobility regimes, starting with putting an end to the externalisation of EU borders on African territory (a neo-colonial act of mobility control) and the lifting of visa impositions which make it impossible for the vast majority of the world’s population to travel legally and safely.

A group of students, academics, and activists based in the UK