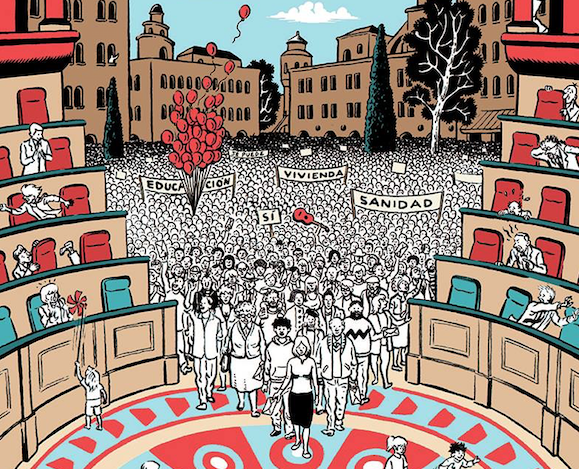 Cities in Common – Against and Beyond the Nation State?

The last decade has seen the miserable resurgence of nationalism. From the right and centre claiming the expulsion of migrants will bring wealth to all, to the return of the leftist desire for a strong welfare-state, the nation continues to haunt the political imagination. Yet the ‘communist hypothesis’ has always been of a world without nation-states – a world of free association, and a world held in common. How can we organise a truly post-nationalist movement, one that’s grounded in the building of autonomous systems of social reproduction, and that strengthens our hand in, against and beyond the nation-state?

From Rosario (Argentina) to Jackson (USA), and from Naples (Italy) to Barcelona (Spain), social movements have started taking power in their cities. From the building of autonomous food provision and services, the emergence of a network of ‘sanctuary cities’ to provide safe-haven to migrants, through to social-movement backed citizen movements taking control of their councils, the ‘city’ may be emerging as a fundamentally important scale. Rather than a politics of national parties and fiscal policies, municipal movements are emerging with a focus on empower citizens, democratizing decision-making, and building the commons.

We’ve gathered a number of our European friends to discuss the role of municipal politics in developing a truly post-nationalist strategy for the building of the commons. We’re interested in exploring how these city-orientated strategies are more than a return to the ‘local’, but rather an opening to a new post-national strategy for the left.

Contributors to the panel include activists from Barcelona en Comú (Barcelona) and Zagreb je Naš (Zagreb).

We are also hoping to be joined by one of our Italian friends, to share experiences from the wave of radical municipalist movements that are rising in Italy’s cities.