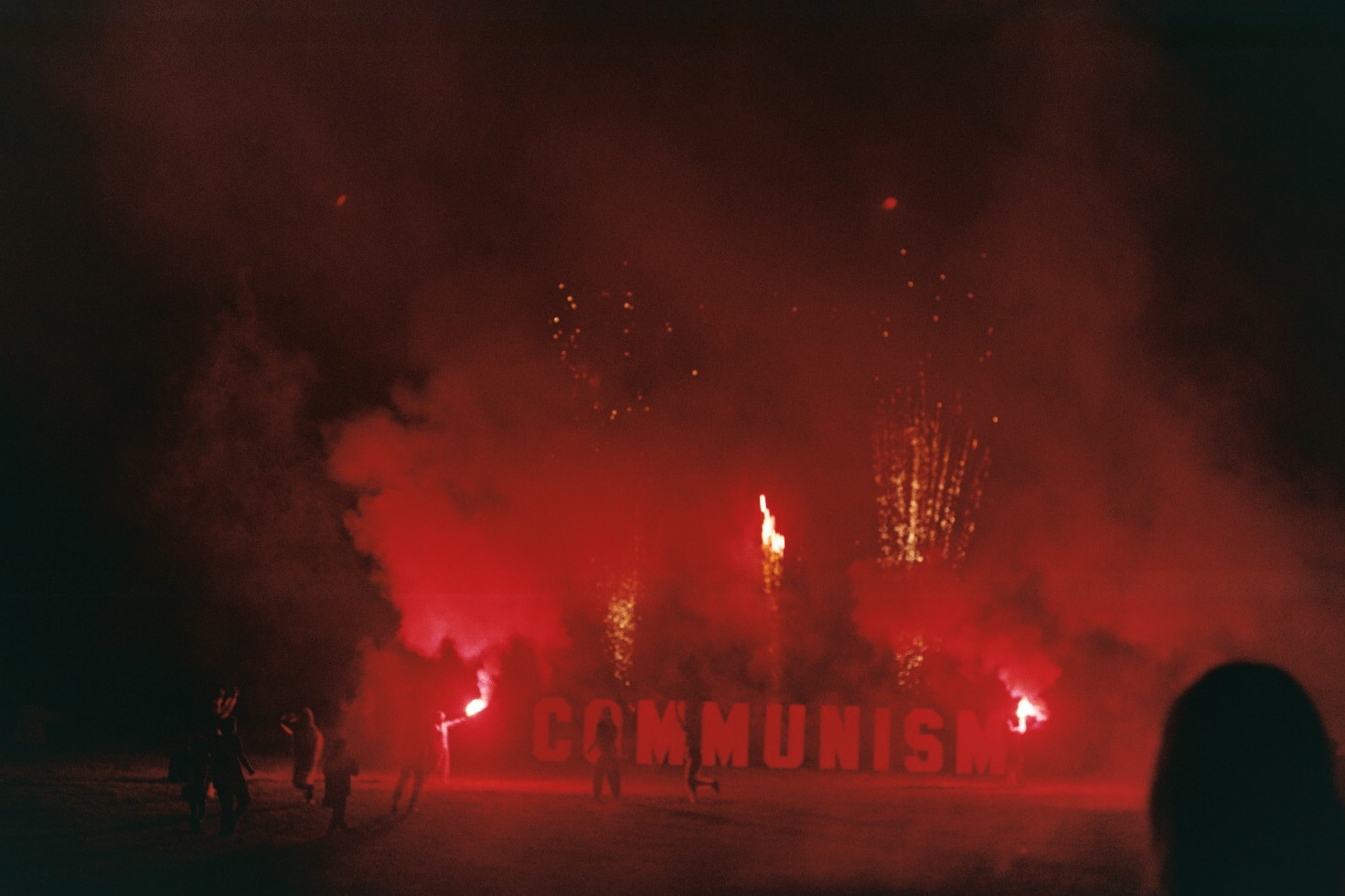 On 19th-21st July in rural Derbyshire, Plan C held our fifth Fast Forward festival. This year around three hundred people came along to take time out, grapple with ideas, learn from each other and socialise together. Here we republish the introduction to the festival, where we review the past year and explain why we must never stop hoping and fighting.

As we meet again to communise a little space in the peaks where we can talk, dance and plot our way towards revolutionary horizons of total emancipation for everyone and everything, it’s fitting to begin with a look over the last year.

We meet still in a decade-old crisis in the capitalist world-system, hurtling to ecological catastrophe – and still the ruling classes have no new hegemony to replace neoliberalism, no new false common sense. We all know the social, political, economic and ecological devastation that neoliberalism has caused, before the crisis and after in the guise of austerity – mass homelessness, precarity, in-work poverty, anxiety. Now is the time of monsters.

Last year was the fourth hottest on record globally, only beaten by 2017, 2016, and 2015, and 2019 is forecast to beat those records again. Extreme weather events are the new normal across vast stretches of the planet, and the ruling classes continue to prioritise capital accumulation over the conditions for life on earth. Only a truly global, transnational movement can hope to overcome this, struggling by any means necessary for a radically transformed social and political ecology – and this last year, as our speakers tonight show, the seeds of this movement’s ecology have been sown. Thousands of young people across the globe have refused the status quo and demanded profound systemic change – and in the Earth Strike this coming September we all must join their refusal and make that same demand. In Germany, our comrades at Ende Gelände demonstrated the force of mass counterpolitical direct action, with thousands of militant ecologists stopping the largest coal mine in Europe. And, yes, Extinction Rebellion too shows the urgency and people’s readiness for mass action across the globe, although it also shows the necessity of critical radical politics at the centre of all our movement building.

Not least because, as the disgusting events in Christchurch New Zealand in March demonstrate, eco-fascism is very real. And in general the last year has continued the trend of rising global reaction, Bolsonaro in Brazil joining the growing dark international of ultranationalists and proto-fascists. But as this dark international ratchet up the war on political, economic and increasingly climate refugees, bright lights like Captain Carola Rackete show us what must be done. For anti-fascist resistance is also growing: on October 13th in London thousands of anti-fascists led by women, non-binary people and migrants stopped the DFLA in their tracks, the most dramatic victory in a re-vitalising anti-fascist landscape.

And this feminist intervention in anti-fascist organising is especially timely because these reactionaries organise precisely around hatred of women, queers and people of colour, desiring to control and dominate their bodies. But 2019 saw the continuing rise of a new wave of truly radical, emancipatory feminism worldwide: in October a mostly feminised workforce in Glasgow went on the largest care-work strike in UK history, in January 5 million women formed a 620km human chain in a mass demonstration for equal access to religious sites, and on international working women’s day there was another awe-inspiring global mobilisation: in Spain 5 million women walked out, refusing the double exploitation of the home and the workplace, women in over 70 cities in Italy did the same, in June for their Women’s Strike in Switzerland hundreds of thousands of women rallied, and in the UK more cities than ever took part, with over 4,000 rallying in London, thousands more across the country, and women’s strike assemblies now in 10 cities.

This transnational movement has as its bright light the women’s revolution in Kurdistan and North-East Syria – and seven years ago today, on July 19th 2012 in the city of Kobani, the People’s Protection Units took over from the regime, and the Rojava Revolution began. Since then the Women’s Revolution has defeated one of the most bloodthirsty forms of fascism ever to exist, liberated a third of Syria, and begun building a radically democratic socialism based on autonomy, confederalism, gender liberation, intercommunalism, a co-operative economy and social ecology – all the elements of a free and equal life in a liberated, democratic modernity. But last year we saw the precarity of this bright light of hope, as the interstate system ignored the Turkish state’s imperialist invasion of Efrin, as well as the ongoing ethnic cleansing and crimes against humanity caused by the Turkish army and its fascist mercenaries. We must stand ready to rise up and defend the revolution as true internationalists against the interstate system, whether from the invasions of the Turkish state, or against the targeting of Kurdish communities and solidarity organisers with reactionary terrorism laws.

Because, of course, Rojava’s women’s revolution is an internationalist movement born in the global cycle of struggles begun across north Africa and the Middle East in 2010 – and that bright revolutionary hope continued in 2019 with the revolutionary movements in Sudan and Algeria. In Sudan, the scenes rapidly transformed from the most joyful militancy to the most brutal repression, yet millions continue to demand popular control of the revolutionary process, and in Algeria the revolutionary committees refuse to give up the struggle for their demands.

So, with these movements past and present in our hearts, and in the face of an all-too real climate extinction, we must never abandon hopeful politics, never abandon our utopias and other possible worlds. July 19th is also the day in 1936 when the Spanish Republican government armed the unions to defeat Franco’s attempted coup, and Catalonia’s revolution began. So it feels fitting to end with the words of Durruti: ‘It is we, the workers, who built these palaces and cities… We, the workers, can build others to take their place. And better ones! We are not in the least afraid of ruins. We are going to inherit the earth. There is not the slightest doubt about that. The capitalists might blast and ruin their own world before they leave the stage of history. We carry a new world here, in our hearts. […] That world is growing in this minute.’