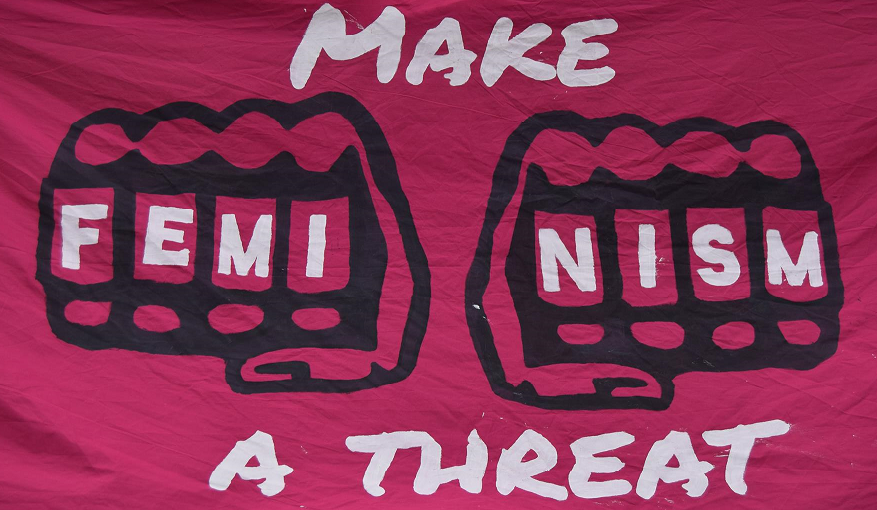 On the second day of Fast Forward Festival, several members hosted a workshop on the topic of organising a Women’s Strike in 2018. It was very well attended, and provoked an energetic discussion. Below you can see the ideas and texts that inspired the workshop, as well some of the outcomes.

N.B. If you want to get involved in planning for the Women’s Strike 2018, there e are two events coming up on the 28th of September, one in Birmingham, and the other in London.*

The workshop was introduced with the following text: “In 2017 women across the world went on strike on March 8th. In 40 countries, from Argentina, to Ireland and New York – thousands of women marched, assembled and withdrew their labour from both their paid and unpaid jobs. In the US the International Women Strike platformed six intersectional and radical demands: End to Gender Violence, Reproductive Justice for All, Labour Rights, Full Social Provisioning, For an Antiracists and Anti-imperialist Feminism, Environmental Justice for All. In Ireland, women used the leverage of a women’s strike to continue to push for a repeal of the 8th amendment that makes abortion constitutionally impossible in Ireland.

In this workshop we will come together to reflect on our experiences of feminist organising and start to plan for a Women’s Strike in 2018 in the UK.

This workshop is open to all genders. We will be amplifying the voices and experiences of women who have been marginalized and silenced by decades of neoliberalism directed towards the 99% of women: working women inside and outside of the home, women of colour, indigenous women, disabled women, immigrant women, Muslim women, lesbian, queer and trans women.”

Workshop goers then read and discussed a text written by Mariarosa Dalla Costa in 1974, “On the General Strike”. This was a speech that she gave at the launch of the Wages for Housework campaign in Italy. You can access it here.

The second text was the “Geneva Women’s Assembly Zine”, which features the rationale for the exciting actions that took place in on International Women’s Day in 2017. It also includes a compilation of #whyistrike statements, written by the women involved in that action.

The workshop inspired an energetic discussion, they key themes of which can be summarised as:

Here’s the call out for further meeting on organising a UK Women’s Strike in 2018:

“Join us to discuss how we can work towards making the Women’s Strike on March 8th 2018 a reality in the UK. This women’s assembly is open to all women, non-binary people and allies of all genders. Last year we saw tens of thousands of women across the world, in South America, the USA, southern and eastern Europe take to the streets, protest and go on strike. In recent years there has been increased attacks on women’s rights – from attacks on the right to abortion and reproductive services, to the high numbers of women killed from domestic violence, to always being the lowest paid and having the worst work conditions, to the slashing of the welfare state and the imposition of austerity which impacts women’s lives disproportionately.

The Women’s Strike is about more than just the withdrawal of our paid labour or work – it is also about recognising that women take on a disproportionate amount of unpaid work in the form of cooking, cleaning, caring and other tasks which contribute to the day to day functioning of society. Women’s labour is exploited in multiple ways and a women’s strike is about building the counter-power to fight back against the multitude of issues facing women, non-binary and femme people.

You can learn more about last year’s strike and the demands here: https://www.womenstrikeus.org/

We are open to people of any gender attending the meeting but the strike will led by and prioritise the voices of women and non-binary people. We are trans and sex worker inclusive. We respectfully suggest that men avoid dominating discussion and that they also volunteer for tasks which are traditionally done by women e.g. cooking, cleaning, care. The event will be kid friendly – we will organise care and food for everyone.”