Reaction & Populism / An Inquiry into the Present. 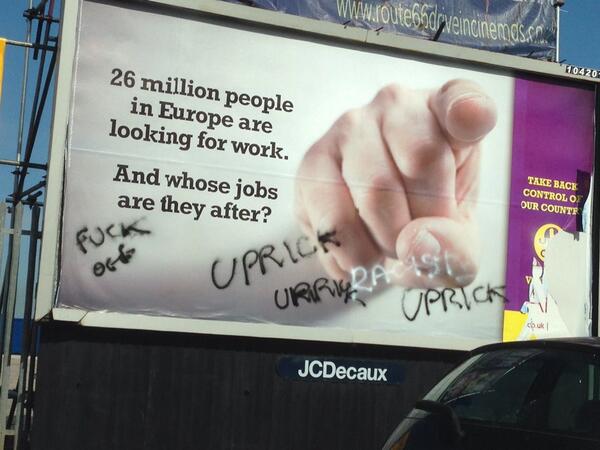 The left isn’t the only oppositional voice trying to make itself heard. We aren’t the only ones contesting the status quo of stagnant economies and post-political parties. In the UK, Greece, France and Hungary neo-fascists and ultra-nationalists are winning significant victories whilst conservative positions on gender and reproductive rights are also making advances. Beyond the far right other forces are also stirring.

In a period defined by the staleness of its major political parties we are seeing the rise of populist parties who claim to support “the people” against an uncaring class of “elites”. These range from Nigel Farage’s right wing euro-sceptic UK Independence Party to the “apolitical” 5 Star Movement (M5S) in Italy. Given the current crisis of the left, progressive forces are also taking a turn towards populism. Here in the UK Russell Brand hit a public nerve denouncing the current parliamentary system.

Much ink has been spilled trying to define what populism actually means. It is a contested idea with a long history. Many who could be defined as populists refuse to accept the label whilst many who do not appear to be populists are falsely labelled with it. One working definition which is useful as a starting point is;

A political movement, philosophy or tendency seeking to protect or liberate the people through the state and its laws in opposition to a corrupt elite.

Popularist politics simplifies the world and leaves its core problems and contradictions unchallenged. Capitalism is not a problem caused by a small (or even large) group of elites. There is little space in the populist worldview for discussions of structural inequality or truly radical social change. Indeed, populists share ground with, and can help propagate conspiracy theory worldviews and forms of oppression against those seen as not constituting ‘the people’ e.g. anti-semitic or anti-migrant politics.

What are the fears and antagonisms which these movements and personalities thrive on? What is the radical left’s relationship to populism and how do we combat reactionary forces?

This inquiry we will attempt to use our diverse collective knowledge, experiences, stories and ideas to construct a genealogy to map our a history. Each inquiry is orientated around a “lens”. A lens, like what we would imagine a lens to be, is a perspective we can look through that enables us to see the world with a particular emphasis, from a different angle so to expose the parts of the world we may miss and passby.

We want to better understand the present, why are things the way they are, what events and moments have occurred that have had significant effects on the course of struggle – an intersectional class struggle – that illustrate deeper understandings of the shifts and needs of a capital accumulation, how these events relate or not to each other, if they define a break with the past, suggesting that what is now is different to what was before – how does this then effect what we do?

We envisage this to be autodidactic, self-educational sessions to produce collaborative and collective narratives and understandings of the political terrain we are operating upon.

Some things that might be touched upon: What can we see happening now that is an image of the future? Ours and “theirs”? What are the limits exist to forming a movement that attempts to face the totality of capitalism? What does it mean for the way we have currently struggled, to struggle more effectively? What demands can be raised to articulate these new struggles?

What price the EU, including fascists? (Paul Mason)

The Five Star Movement is not radical – Beppe Grillo is one of them, not us (Wu Ming Foundation)