On 8 March we struck! Reports from the Women’s Strike

Last Friday, on International Women’s Day, thousands of feminists of all genders took to the streets in seven cities across the UK to engage in the Women’s Strike, a global mobilisation taking place in over fifty countries. We have collected here the reports shared by the local organisers on the Women’s Strike Assembly page (pictures also come from there), followed by a reflection on why Plan C is engaged in the movement. 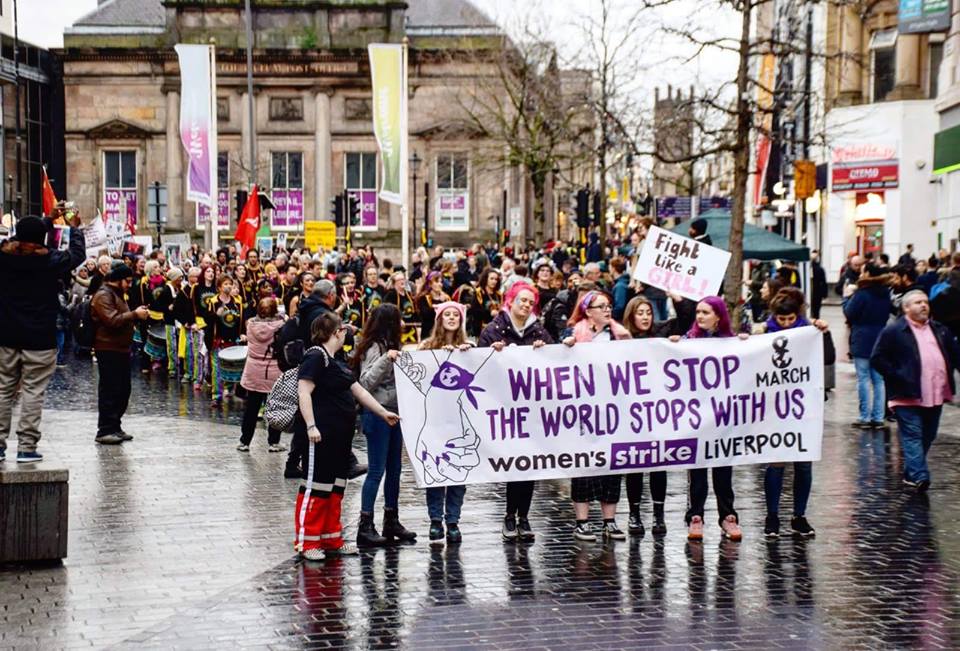 In Liverpool, at 5pm on Friday, around 500 gathered in the city centre. The crowd marched through the city to the sound of chants and drumming. The march then arrived at Williamson Square where there were performances from a samba band and an all-women choir. Following this, a rally of rousing speeches took place, including contributions from Women’s Strike organisers, trade unionists and a local Labour Party representative amongst others. One special highlight was speeches from 5, 7 and 8-year-olds explaining why they are feminists!

In London, Friday saw a day packed full of action. In the morning, a group of fifty trans activists and their allies occupied the Ministry of Justice to express grave concern about government plans to move trans women to men’s prison estates and to open segregated wings for trans women at HMP Downview. Later on, over 400 mothers, carers and children attended “My Mum is on Strike” events happening across the capital. Then, at 5pm, over 4,000 gathered outside the Bank of England for a rally of rousing speeches from phenomenal feminist activists, followed by a loud and vibrant march through the streets. The demo then joined up with the incredible Sex Work Strike for a rally and marched to Piccadilly Circus, where the day’s action concluded with performances, chants, music and dancing. Finally, hundreds headed to Dalston for the Women’s Strike afterparty and fundraiser, featuring free food (cooked and served by men), music from awesome feminist DJs as well as live music from the Samba Sisters Collective. 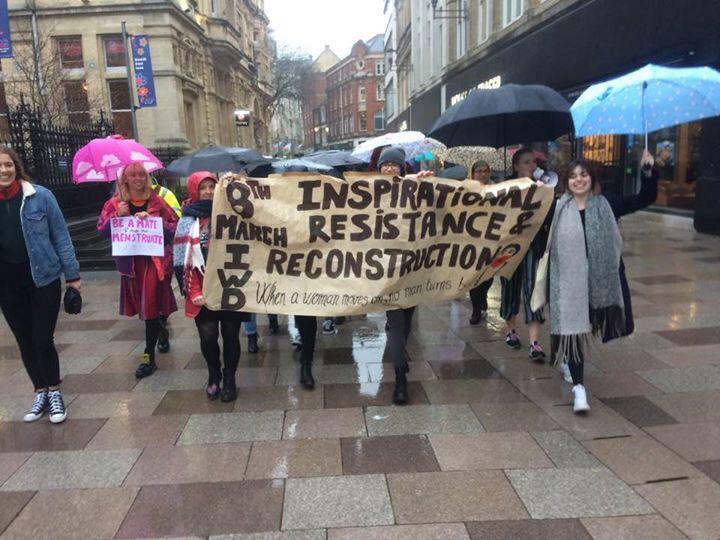 In Cardiff, feminists organised a whole day full of activities for the Women’s Strike. The day started with a picket at the job centre to highlight the cruel and gendered impact of Universal Credit and austerity. This was followed by mums striking at a stay and play group at the trinity centre. Joined by the group Periods in Poverty, over fifty came to enjoy the afternoon, with face painting and workshops provided by the community. At 5pm, after speeches by the Women’s Strikers and Cardiff North AM Julie Morgan at the central library, a loud and vibrant crowd made its way through town to the trinity centre. There, the group met with strikers and started celebrations which lasted all evening, including food provided by Women Connect First and performances from Atlantic College, the Ladies of Rage, Amelia Unity and Dee Dickens. Solidarity and support was shared with the Kurdish community and the free Abdullah Öcalan campaign, the free Palestine campaign, the Industrial Workers of the World, the Unite Community and artists there for the women of Cardiff. 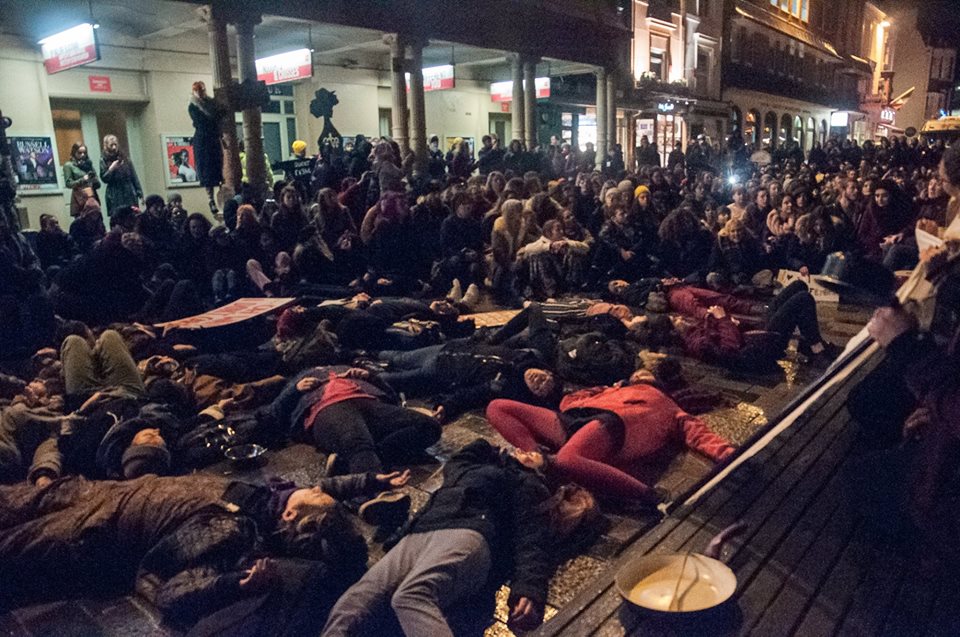 In Brighton, hundreds of feminists gathered at the clock tower in Brighton town centre where the large crowd listened to rousing speeches from Devil’s Dyke Network, Brighton Antifascists, Morada Feminista Nicaragua UK, Palestinian feminists & Marea Granate. The demo then marched through the town centre to the rhythm of a cacerolada (a form of protest which uses pots, pans and other utensils to make noise), stopping to perform in front of the Royal Theatre in honour of all the sisters that couldn’t be there, killed by a system that divides and exploits women. The march then continued to Old Steine, where the incredible action concluded with singing, dancing and shouts of “Ni Una Menos”! 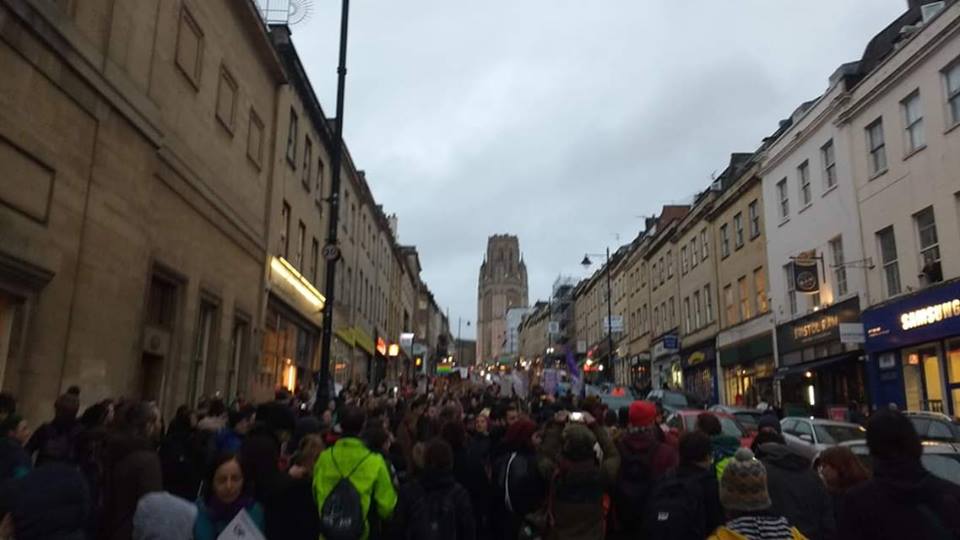 In Bristol, following a day of creative actions, people gathered at 5 pm in the city centre. Free hot food was cooked and served by men. After some rousing speeches, the growing crowd rolled by the Council House and took over a major shopping street, loudly cheered by many drivers and passers-by. The morale was high and powerful, with loud chants being sung throughout the march. A feminist rapper, singers and fire jugglers kept a triumphant crowd entertained into late evening. A square column was decorated with a large feminist reflection writing board, with many strikers and passers-by stopping to write their reflections and plans for the future. The demonstration was organised in just over six weeks by Bristol Sisterhood and Plan C Bristol, both recently formed groups. The turnout of between 500 and 600 people was higher than expected, and certainly a success.

In Edinburgh, in the cold and rain, around 1,000 people came out to join the Women’s Strike march. The demo was vibrant and diverse, featuring an IWW union bloc, a Rojava Solidarity bloc, a student bloc and more. The march was followed by a rally featuring speeches from members of Women’s Strike Assembly, Abortions Rights, Zero Tolerance, Scot – Pep, NUS, Gals for Gals and others. The incredible day was then closed by a gig in the city centre until 3am. 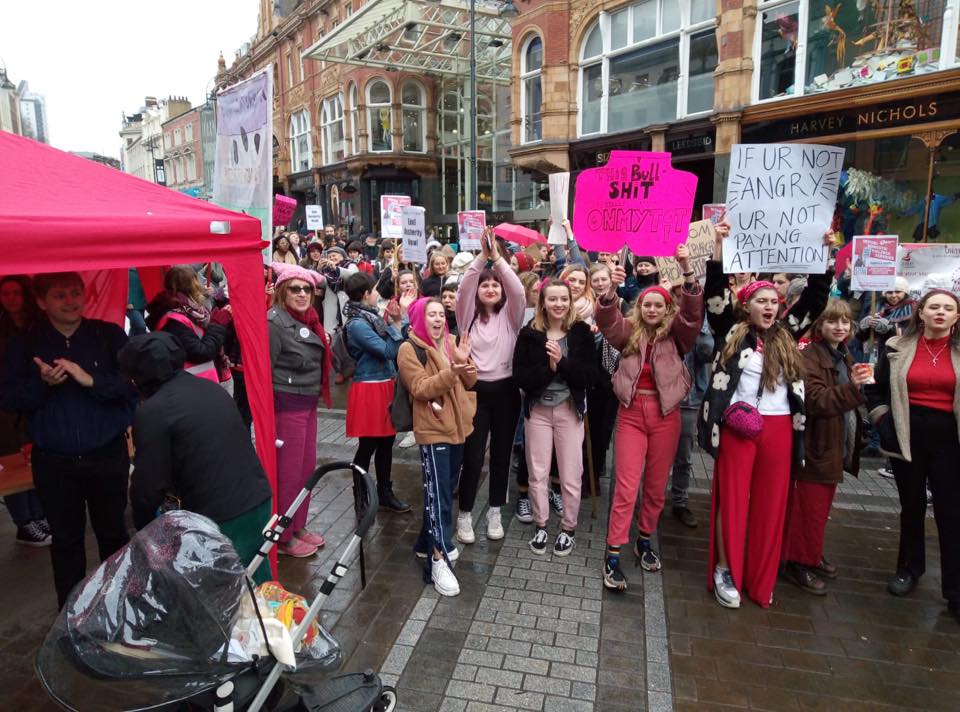 In Leeds, hundreds gathered in the city centre, blocking roads, marching through and disrupting shopping malls, with hundreds of passers by showing their support along the way! The red tent at the rally was a crèche for kids featuring face paint, chalk and colouring activities. Then at the Assembly later in the day over fifty gathered for one of the largest feminist meetings in the city in recent years, to strategise for building the movement going forward.

There are many reasons why Plan C is involved in the Women’s Strike. Since the beginnings of Argentina’s Ni Una Menos in 2015, a new wave of feminism has turned into a mass-mobilising global movement able to counteract reactionary forces worldwide. As hard-won, but insufficient, women’s rights have come under the attack of Donald Trump, Jair Bolsonaro, Andrzej Duda, Matteo Salvini, and the like, feminism has once again emerged as a powerful vector of antagonistic social opposition. These mobilisations, far from just defensive, gained new concessions, as the case of Ireland clearly illustrates.

In the UK, however, this feminist movement has not yet reached the massive proportions that we have seen in countries like Argentina, Chile, Spain, Italy, Poland, and Ireland. This is not the place to discuss why. This type of feminist movement is necessary in this country NOW. This is a mass holistic movement: it is anti-patriarchy, ant-capitalist and environmentalist. It is necessary because women are bearing 86% of the austerity burden increasing the exploitation of their paid and unpaid work. It is necessary because Tommy Robinson’s “alt-right” is attempting to co-opt and racialise the anger over gender-based violence, to further the Far Right’s utterly patriarchal agenda. Environmental devastation is jeopardising the very future of reproduction of life on this planet.

This is why we thought it important for our cities to join Buenos Aires, Santiago de Chile, Istanbul, Rome, Madrid – the hundreds of cities and millions of people who interrupted their productive and/or reproductive activities to take part in this global day of struggle against patriarchy.

For us, the fight against patriarchy is interconnected with the fight against capitalism, racism, imperialism, and environmental devastation, just like the power relations that constitute such structures are interconnected in one complex system based on the differential exploitation and commodification of life. A system that structurally denies the reproduction of life in conditions of collective dignity and autonomy.

As the Women’s Strike Assembly states: “We are not asking for our fair share under capitalism, we have zero desire for an equality that promises nothing more than being equal to a wage slave: instead we are seeking to destroy altogether the system that by its very design – divides, harms and exploits us. We already know women’s liberation to be at the heart of the struggle. But just so we are clear: there will be no revolution until women’s lives and our labour are central to every political question”.

It is on the basis of this analysis that we will carry forward our future activities, because as Audre Lorde said: “There is no such thing as a single-issue struggle because we do not live single-issue lives”!