All over the world people are organising themselves on the ground in solidarity with each other in order to survive and overcome the day to day suffering and exploitation that affect all of us living under capitalism. In these efforts we find common struggle against the damage done by the neoliberal state. Through mutual aid, collective organising and feminist care practices, these liberatory alternatives show us that the established state of things is not our fate, but is something we must seek to replace by finding practical solutions and establishing new forms of social relations.

State and capital are without doubt at the heart of all conflict we experience in the world today – from health crises to ecological catastrophe, domestic violence to war, worker’s exploitation to racism and xenophobia. Periodically, crises occur in which cracks in the system become exposed as things begin to collapse. During such times, how can physical bases of autonomy and solidarity transform our relationship to the state and capital? How can they ensure that we are equipped to nurture and build a movement capable of transforming the whole of society?

“Dual power” is a term used to describe the idea of two co-existing powers – one (capitalism), oppressive and exploitative and another, liberatory alternative – that can emerge at such times, as well as the set of institutions and economic base which the left needs to focus on building in order to be able to take advantage of such moments of rupture and successfully navigate the transition away from capitalism.

The notion of two opposing currents competing for legitimacy will be familiar to those involved in any kind of revolutionary struggle. The concept of dual power has been explored and developed by various tendencies on the left throughout the 20th and 21st centuries – from revolutionary communists, anarchists, libertarian socialists, autonomous social movements, social ecologists and radical municipalists.

For those new to the idea, there is some helpful jargon busting and nods given to a number of thinkers, writers and activists who have explored with various notions of the idea by Black Socialists of America, who have also begun to piece together a Dual Power Map of existing groups and networks that are seeking to build alternatives both inside and against the oppressive forces of state and capital. These provide a rich source of inspiration and a call for radical and visionary experimentation on behalf of those of us on the left.

Beneath the governmental machinery, in the shadow of political institutions, out of the sight of statemen and priests, society is producing its own organism, slowly and silently; and constructing a new order, the expression of its vitality and autonomy.

We can learn from some of the examples provided in the readings and Plan C articles below – from the Zapatistas in Mexico to the Democratic Confederalist system of North East Syria. In Europe and North America we see a growing Solidarity Economy Movement exploring mechanisms of shared ownership, autonomy and self-governance among workers cooperatives. All this takes persistent and dedicated organising. But people only start to believe that another world is possible when they see it being built before them. Then the possibility of radical change becomes something more than just a visionary horizon but a free life worth fighting for.

More from Plan C on this topic

From Mutual Aid to Dual Power: how do we build a new world in the shell of the old?

“At the end of the day, it’s just us” – Mutual Aid, Direct Action and Disasters

For a Practice of Politicised Commoning: An Interview with Werner Bonefeld, Ana Cecilia Dinerstein and John Holloway 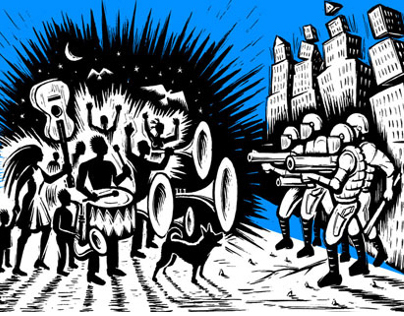