Just over a year ago the first edition of the Social Strike Game rulebook was released into the world. The game, a table-top, scenario planning game, was designed to do three things. Firstly, we were aiming to spread the idea of social strikes and help people grasp the analysis behind it. Secondly, we wanted to encourage the left to practice more long-term strategic thinking. Thirdly, we thought people would have fun.

The rulebook contained everything needed to design and play your own game session based around your own locality or situation. Some have done so. For example, the New Economy Organisers Network have been using the game as part of their organiser trainings, Manchester’s Law Centre adapted the game to form part of their induction process, while an anti-capitalist group in Malmo, “Allt at alla”, sent us a detailed report of their adaptations of the game including the addition of dice rolls. But it seemed to us that more people were asking us to come and run game sessions for them than were reading the rule book and designing game sessions for themselves. So far, we, the core group who designed the game, have run twelve game session around the country.

Driven by a desire to make running game sessions less daunting while ramping up the drama of game play we decided to add dice rolls to the game. As a consequence, we’ve released the second edition of the game. We think you’ll like it.

To send us game reports or to otherwise contact us please write to: leeds@weareplanc.org (please mark the email FAO Social Strike Working Group). 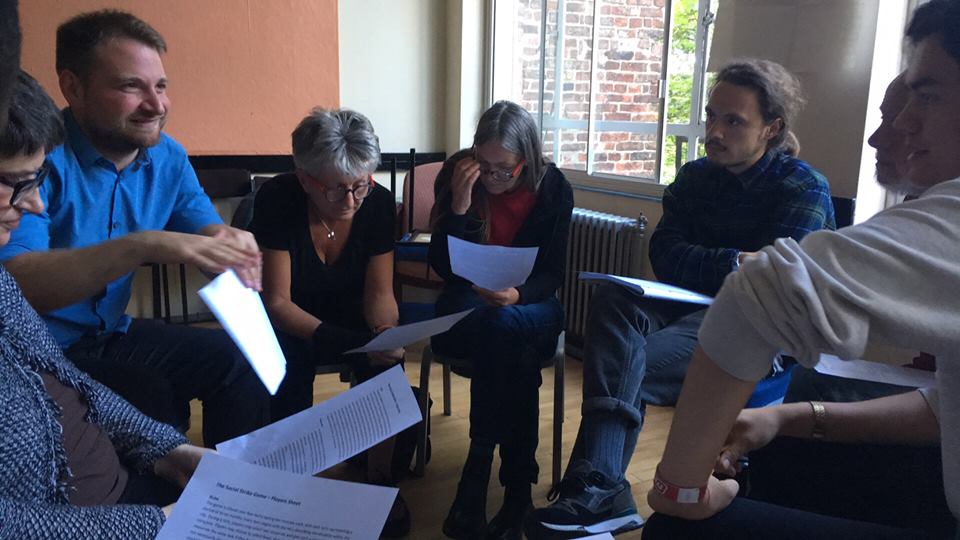 What is the Social Strike Game?

The Social Strike Game is a group strategy game that’s fun for all the comrades. It’s an opportunity to use your imagination to figure out ways that an array of different groups and resources in a city can co-ordinate to develop social struggle in a revolutionary direction, build community, deal with crises, respond to significant events, and smash capitalism. There are no correct answers in this game. Instead, judgements about the impact, fall-out, and transformations resulting from each group’s suggestions are made by the Master(s) of Ceremony based on how well proposed they are. Although the authority of the MCs is absolute and unwavering, we hope and expect that this will cause disagreement and lively discussion. This is a game and as such it’s supposed to be playful and entertaining. Like all good games, though, we hope it has applications beyond the tabletop. Playing this game should get you thinking strategically and tactically about social struggles in the place where you actually live. What would it take to make a strike in the place you work sustainable for longer? How can a campaign you’re involved in enter into a relationship of mutual support with a completely different campaign, bringing out what is common to both? How can skills that activists have developed in one specific context be shared and modified so that they can be used in another? Is it really plausible that your local pay-as-you-feel café could be the central hub of an armed uprising within half a year? What sort of structures would you need to create a city wide social strike?

[Text from rulebook PDF] The Social Strike Game Version 2 No frills A4.docx (173.3 KB)
– For if you just want something you can print out at home.

You can also find the Social Strike Game 2.0 in the Plan C online shop.